What is Clockwise Chester?

A new rainwater drainage tunnel is being installed in the city centre. As a result, the inner ring road’s traffic pattern will be altered. 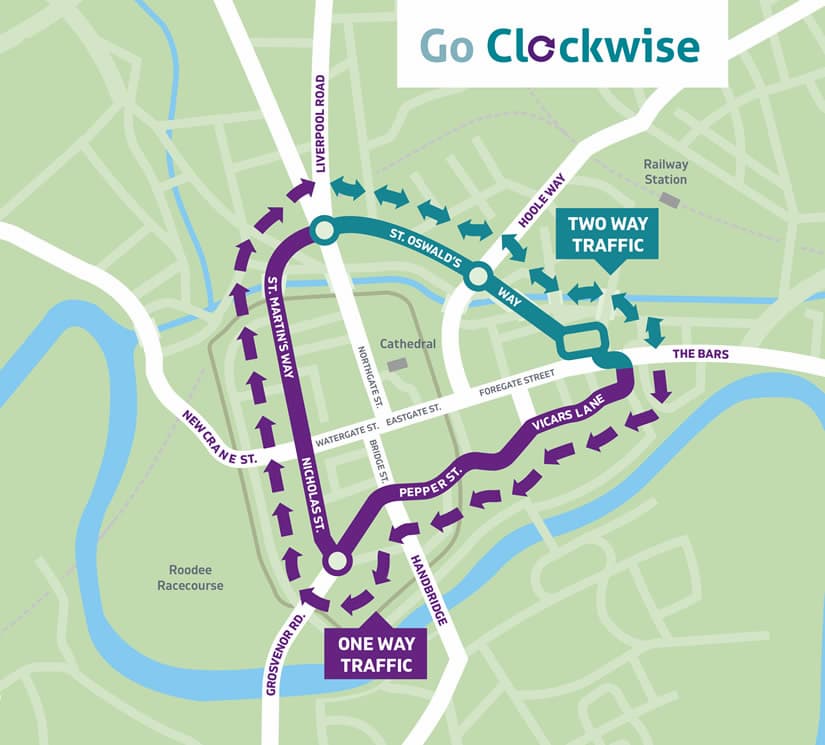 What is the reaction of residents?

By and large, most residents are discombobulated by the prospect of traffic on an important and frequently-used road in the city centre becoming disrupted. They also commiserate with the innumerable businesses in the area, which may suffer due to lack of proper access, especially during the busy Christmas shopping season.

A few comments by residents of Chester are:

The comments are sourced from the Facebook page of Cheshire Live news outlet.

“Utter madness. The retail and hospitality businesses will be finished. They are already under pressure with Covid. Customers are not coming into traffic jammed Chester. This is devastating.” said Michael Ashcroft.

Emma Wild described that her regular commute would now take 40 minutes. She said, “I have to drive into town from Saltney to drop my son at school. I then drive up past the Countess to get to my school in Ellesmere Port. Since the bus lanes went live on Monday, I haven’t seen one bus, just loads of cars rammed into one lane. It’s an absolute farce. Home time is probably going to take me at least 40 minutes longer than usual, with an already tired 8 year old stuck in the car.”

But not all residents are viewing the project as a negative.

Chris Welsh says “See how it goes. It COULD work wonders. If it causes more problems then scrap the idea. If it works, keep it longer.

Pippa Miln is willing to put up with the temporary inconvenience to give the idea a fair chance. She says, “I will be intrigued to see how it works. It could work out as a positive”.

What is the recommendation of the Chester city council?

Chester city council states that proposed large-scale expansion plans for the city centre will include a new market, cinema, parking spaces and a public square to strengthen the city’s position as a premier tourism and retail destination.

To accomplish this, the underlying infrastructure will need to be laid first, and the new rainwater drainage tunnel is part of the plan.

Councillor Karen Shore, Deputy Leader and Cabinet Member for Environment, Highways and Strategic Transport, assures the residents of Chester that the project has been carefully planned for minimal disruption to life in the city.

To mitigate the inconvenience caused, the council has a recommendation:

Residents driving to or from North Wales and Wrexham are urged to use the A55 to bypass the city centre, or use the M56 and Queensferry to or from the direction of Wirral and Neston.

To access the various shops and attractions within the city centre, the council recommends using public transportation or park-and-ride services. Cycling or walking is recommended, especially via the traffic-free Millenium Cycleway and Canal.

The proposed one-year infrastructure project will significantly alter traffic and life in the city centre of Chester, but its long-term benefits are predicted to be beneficial to the economy of the city, with the temporary inconveniences far outweighing the advantages in the long run.

The town’s medieval and pre-medieval architecture needs to be seamlessly integrated with a burgeoning resident and tourist population and modern amenities. To maintain this balance, periodic infrastructure projects need to be undertaken and “Clockwise Chester” is one of them.

Chester’s large number of historical attractions are bound and accessed by an inner ring road, which currently allows two-way traffic. When the project begins on November 16th, 2020, most of this road will be made a two-lane one-way traffic road, with traffic flowing in a clockwise direction. The duration of the undertaking is projected to be one year.

Chester is a veritable treasure-trove for history buffs as it contains relics of almost every phase of its bygone ages. The walled city of Chester was born in 79 AD as a Roman settlement and the Roman Deva Victrix fort still stands in the city centre, attracting tourists.

It was subsequently occupied by the Saxons who built its famed cathedral and fortified the city with walls as protection against the Danes. The walls still form the perimeter for the bustling city centre today. You can gain access to this perimeter from any of the four gateways surrounding the city centre and take a stroll on the lofty walkways to take in the expansive views of the city and its outskirts.

Chester finally fell to the Normans but did not lose the precious symbols of its former rulers and occupants.

Today, the city centre is a hub of activity and boasts an even wider variety of attractions to suit every taste.

The Chester Cathedral has a 1000-year history, which you may discover through guided tours. Its exquisite architecture and stained glass rub shoulders with the exquisite artwork in its galleries and the breath taking view from its tower.

Its splendid gardens invite you to take a leisurely stroll and you can also take in a falconry demonstration and visit the reptile reserve as you do so.

Chester Castle, which also houses a military museum, Grosvenor museum that will educate you in the entire gamut of its history, and an assortment of ancient picturesque churches complete the repertoire of its attractions.

For a more modern pastime and the piece de resistance, you may explore the cobblestone streets flanked by medieval black and white buildings that are 700 years old and house shopping galleries today.

All these attractions are bundled in the town centre, with the inner ring road serving as the main artery that provides access to them.