An exciting and unique event is about to take place in Chester on May 5, 2018. At 11:30 am, the temporary wooden gates at Eastgate are being opened in first Ceremony of the Gates. Featuring reenactments of the Roman occupation and the Royalist Troops’ defence of the city during the English Civil War, the ceremony celebrates the city’s rich history. 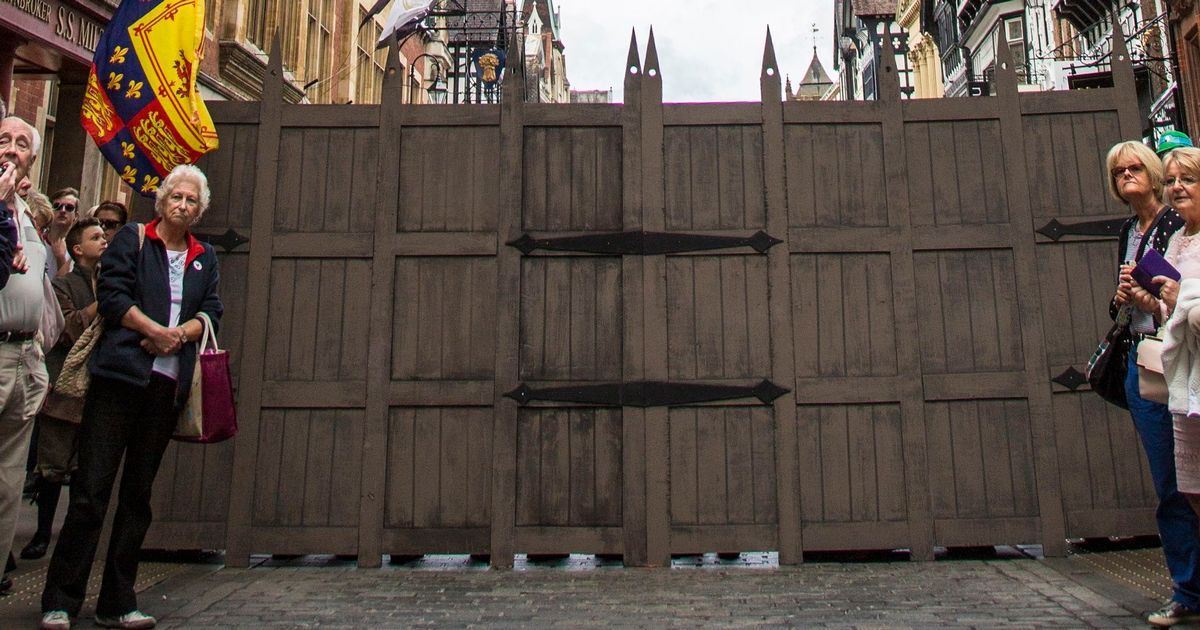 One of the most historic cities in England, Chester is located in North West England’s Cheshire County, along the river Dee near the border with Wales, just two hours by train from London. Until 1833, the only bridge from Wales to England went through Chester, allowing the town to collect taxes from all the traders and travellers. The mixture of architecture in Chester reflects the city’s rich history; Roman, Saxon, Norman, Georgian, and Victorian styles can be found alongside more modern buildings.

Britain’s most Roman town, Chester began as a Roman fortress, Deva Victrix, built in the 70s AD. It was surrounded by two gates and defended by a timber tower. A historically significant Roman Amphitheatre from around that time was discovered in 1929 and partially excavated in the 1960s. The largest-known amphitheatre of its kind in Great Britain, it could seat over 7000 spectators, possibly as many as 10,000, and it was used for sporting events and festivals. Its size is an indication of how large and wealthy the civilian population was that had settled in this area.

Around 100 AD, the Romans added a sandstone wall and rebuilt the towers in stone in an effort to further defend their fortress. After the Romans left the area, the Ango-Saxons came. They extended the walls in the 900s and renamed the settlement Legacaestir, meaning “city of Legions.” The name was later shortened to Chester. In the eighteenth century, when the walls were no longer necessary for defence, they were converted into a two-mile walkway around the city.

The site of the original entrance to the Roman fortress, Eastgate is central to the town’s history. In Roman times, the gate featured two arches and Eastgate Street was the main street. After the Roman period, Eastgate continued to have a colourful history. The Roman Eastgate was replaced around the fourteenth century. In the 1500s, the gates were locked and barred after a city official’s daughter eloped. In 1768, the gateway was rebuilt and widened in order to accommodate traffic and it became the main entrance into the city.

In 1899, the wrought and cast iron clock tower and its famous clock were added to celebrate Queen Victoria’s Diamond Jubilee. The second most photographed clock in England after Big Ben, it has four faces, one on each side. In 2014, Eastgate and its clock underwent extensive repairs and renovations, during which a small section of the original Roman wall was located and preserved. The iconic gate reopened in 2015.

The Ceremony of the Gates

Historical figures who used gates to control access to the city, defend citizens, and raise taxes are participating in first ever Ceremony of the Gates in order to celebrate the gate’s rich past. Gordon Vickers, chair of the Chester Jubilee Gates Group, is playing the part of the Murenger, an official charged with collecting money to maintain and repair the city walls. David Pickering, chair of the Friends of the Chester Walls and former chairman of City Centre Management, is playing the role of the Serjeant of the Gates, who was responsible for determining who was allowed into the city and for collecting fees on imported items.

The Freemen and Guilds of the City of Chester, who were tasked with overseeing the practice of trades, are also being represented at the ceremony. The Town Crier, David Mitchell, will narrate the proceedings to the audience. Levying tolls on teams of oxen carrying over a ton of coal was the Town Crier’s responsibility.

The Chester Jubilee Gates group has been working on plans for a permanent set of ornate gates to be added to Eastgate. The gates would commemorate Queen Elizabeth’s 2012 Diamond Jubilee. The group envisions that the gates will be locked and reopened on a daily basis in a changing of the guard ceremony, involving Civil War soldiers replacing Roman soldiers. Special ceremonial openings could be scheduled to coincide with existing events such as the Roman Festival and the Midsummer Watch. Through this project, the group hopes to promote more tourism to the area, to protect its national heritage, and to help educate and entertain the public.

For a small fee, audience members can take part in Saturday’s ceremony by playing the parts of the Murenger and the Serjeant.

The Ceremony of the Gates promises to be a memorable and fun event, which will raise awareness of the fascinating history of this spectacular town.