Sandwiched between Chester and Liverpool, Ellesmere Port is a town on the rise in North West England. In step with the surrounding area, the riverside conurbation has grown beyond its industrial roots. Today, modern architecture lives comfortably alongside the region’s nine National Heritage buildings built between the 1700s and 1900s. And these days, Ellesmere Port is also home to a handful of destination attractions that make for a great day out. 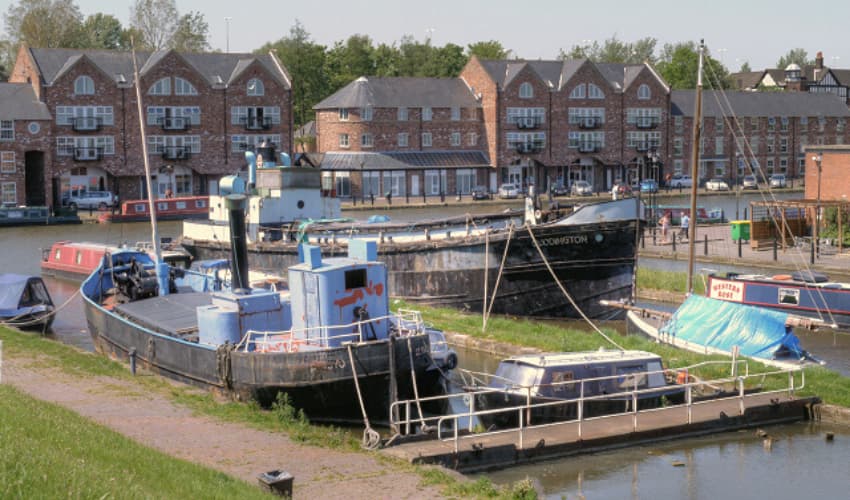 Things To Do In Ellesmere Port

Opened in 1998 by Queen Elizabeth II, the Blue Planet Aquarium is the largest in North West England. The building is shaped like a crashing wave, and the complex includes a 71-metre-long underwater tunnel. Visitors can explore several themed areas, including tropical rivers, coral cove, lakes and ponds, in addition to seas and oceans.

Blue Planet Aquarium has over 100 living displays and more shark species than any other aquarium in Britain. It also features loads of interactive exhibits for kids and adults alike, including a shark dive where families can swim alongside the majestic animals.

Conveniently, the Blue Planet Aquarium in Ellesmere Port has a restaurant, making it the ideal place to spend a day with either family or friends.

At junction 10 off the M53 sits the most expansive retail outlet centre in the UK, Cheshire Oaks Designer Outlet. When it opened in 1995, the complex bore the distinction of being the first designer outlet village in Europe. Today, approximately 145 stores — including Burberry and The North Face — and oodles of restaurants operate out of the venue.

Spend the day weaving through the stores, and then rest your weary feet while enjoying a meal you don’t have to cook at one of the complex’s many restaurants!

3. History at the National Waterways Museum

At the northern end of the Shropshire Union Canal is the National Waterways Museum, the ideal place to learn about canal history in the UK, from both an economic and social perspective. Visitors explore exhibits that celebrate the mechanics of canal life, including old locks, docks, warehouses, pumps, engine rooms, and toll houses. The museum also maintains a blacksmith’s forge, cottages that represent how people lived between the 1840s through the 1950s, and several traditional boats.

Take a ride along the canal with a guide and learn about the life!

4. Unleash Your Creativity at Charley’s Ceramics

Rain or shine, an afternoon at Charley’s Ceramics will invigorate your creative juices. Patrons choose from a variety of unfinished ceramic plates, vases, ornaments, mugs, and teapots to paint and decorate. Charley’s doubles as a cafe offering delectable crepes and coffee that will invite your eyes to slide to the back of your head. For the kids, candy floss, ice cream, popcorn, and a selection of drinks are on tap.

Whether you’re going solo or rolling with a gang, a few hours at Charley’s Ceramics will poof away the stress.

Do you have the nostalgia gene? Do old-timey things rock your boat? If yes, then cordon off an hour for the Hooton Park Trust. A little-known — but much-loved museum — the trust showcases vehicles of the past. The exhibits are housed in a series of converted aeroplane hangers, and the volunteer tour guides are exceptionally enthusiastic and knowledgeable.

Between Eastham and Ellesmere Port is the Rivacre Valley Nature Reserve. Serene and peaceful, the verdant area is an urban woodland paradise, complete with wildflower meadows, a babbling brook, and melodic birds. Several nicely maintained hike and bike trails are open to the public and create the perfect backdrop for a relaxing day outdoors.

7. Let the Kids Loose at Freedome

Are you looking to entertain kids in Ellesmere Port? Freedome is always a smash hit with the young set. An indoor gymnastics park, the facility is home to oversized trampolines and obstacle courses. Exceptionally family-friendly, Freedome has milk-warming facilities on-site and a restaurant with a menu that will please even your pickiest eater.

If you’re looking to tire out some rowdy ones, make a beeline for Freedome.

In the 1860s, the Grace family built Whitby Hall. A red-brick mansion ringed by lush grounds, it once dazzled as the area’s premier private estate. These days, a children’s community theatre calls the house home, and the fields serve as a public park with gardens, soccer pitches, tennis courts, basketball courts, playgrounds, a bowling green, and skateboarding pavilion. Bring the family dog and a picnic for a sun-soaked day in picturesque surroundings.

If you’re not one to picnic, don’t worry. Whitby Hall also has a cafe.

A meticulously preserved walled city that’s been around since the Romans ruled Britannia, Chester is a mere 9.7 kilometers (6 miles) away. Busses and trains will whisk you from Ellesmere Port town centre to the historical urban enclave. For the fit set, a bike ride between the two towns is also doable.

While in Chester, explore the medieval and Victorian architecture; spend an afternoon traipsing through Grosvenor Museum; visit the award-winning Chester Zoo. History buffs can sign up for the Roman tour that explores the city’s still-standing ancient roots, and everyone else can hit the shops and galleries.

10. Pub Experience at The Grace Arms

You can’t spend time in England without an authentic British pub experience, and The Grace Arms in Ellesmere Port delivers just that. Knock back a few beers or scotches at the large wooden bar, or retire to a dining room booth for some satisfying pub food. On sunny days, grab a table out front.

Chester to Ellesmere Port by Taxi

To get exact prices from specific location in Chester to Ellesmere Port destination, please use the free taxi checker.