Take a tour of Eastgate in Chester with some of Chesters friendliest and best-informed taxi drivers already at your beck and call?

Of course, your time schedule and ability to cram lots into your visit will require stamina and planning—which is why you’ll want to approach your visit as a cabbie would–ready to see it all and do it all—as brilliantly and efficiently as possible. Ready for a rocket-ride through Eastgate’s most memorable sites? Put on your seat belt. We’re off. 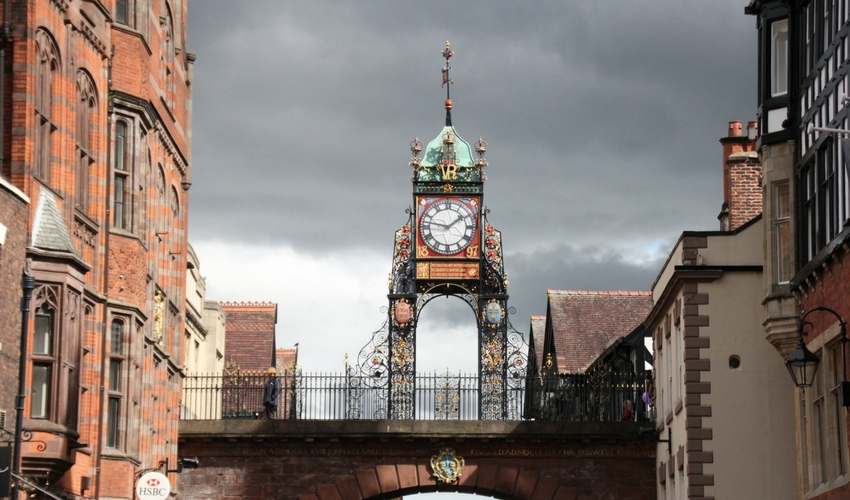 Shop until you drop?

Actually, dropping isn’t required of visitors eager to check out Eastgate shopping meccas. The most nostalgic of the bunch can be found at The Rows, speciality shops hiding behind Tutor-inspired architectural facades that have been known to make visitors feel as though they’ll run into William Shakespeare each time they turn a corner during their shopping expeditions.

This rabbit warren of commerce offers visitors unprecedented variety; from designer boutiques and independent shops to quirky shopping centre havens bearing high street names. You’re encouraged to keep going until merchants put out “Closed” signs if your itinerary includes a stop at Chester Market on Princess Street for sustenance at any of the stalls offering snacks and beverages.

Are you up for becoming a marathon shopper because your time in the neighbourhood is short? Stroll over to Grosvenor Shopping Center to see how much damage you can do to your plastic, but your true motive should be dining at the stylish eateries located amid fashion hubs if you missed that Princess Street stop.

Running out of wonga? Grab one of our cabs and head to for Cheshire Oaks Designer Outlet where more than 145 top brand outlets await your. This easy-to-reach outlet is a must-see, even if a visit turns you into a world-class Sherpa. There you have it. Shopping on steroids in Eastgate!

Tick-tock; you must see the clock

No taxi driver worth his salt allows a visitor to leave Eastgate without a visit to the Eastgate Clock. This aged timepiece was installed at the original entrance to the town originally established as the Roman fortress of Deva Victrix.

You probably won’t find any ancient Romans hanging about during your visit, but that doesn’t mean you won’t appreciate this world-famous clock, said to be England’s “most photographed clock in England after Big Ben,” according to Wikipedia. A snap is required. If you’re travelling as a group, strangers won’t mind taking a group photo, so do ask.

No need to bury yourself in old history texts to appreciate all that this clock represents; it was installed just two years after Queen Victoria celebrated her diamond jubilee when it was set into the three-arched sandstone gateway that lived a couple of lives after being repeatedly re-built in the 2nd, 15th and 18th Centuries. Old meets new at this Eastgate symbol of the passage of time.

Pray for anything that suits your fancy

It’s obvious that several generations of workmen were required to complete Chester Cathedral since it took around 275 years to finish, but since the acknowledged largest Gothic Cathedral in England was rebuilt circa 1250, this house of worship has managed to absorb the thoughts, prayers and hopes of congregants since the day the assortment of architectural building styles (Georgian, Roman and Norman) was opened.

The vicar won’t be standing at the entrance with a collection plate in his hand, but you’ll score points with the Big Man upstairs if you make a donation to keep the church in tip-top condition. If you’re feeling particularly pious, ask your taxi driver to drop you off at Eastgate’s other churches, all of which are inspiring.

Can you pray to find bargains at any of the aforementioned shopping Meccas? Of course, you can. You won’t be the first to do so. Or perhaps you’ll pray for perfect weather, so you can see more of Eastgate’s impressive architectural sites.

A wall by any other name

Think the Great Wall of China and the crazy wall U.S. President Trump is threatening to build are the only landmark walls on the face of the planet? You owe it to yourself to stroll along a hidden treasure that’s the pride of Eastgate: Chester City Walls. Extending 3.2km, this wall has been inspiring and motivating residents and visitors alike since 70 AD. Can you imagine what these walls have witnessed in 1000+ years?

Are you fit enough to keep walking? About 18km beyond the city centre are the Beeston Castle ruins with lofty walls that sprawl along mountainous heights not recommended for blokes with acrophobia. Surrounded by gorgeous woods and ancient caves populated during Britain’s Iron Age, there’s a fee to tour this landmark, but it’s worth every Euro.

If you’d just as soon use your energy for shopping, our cabs can deliver you to Beeston Castle in about 20 minutes and return you to town once you’ve had your fill and you’re ready to take up the shopping gauntlet once again, intrepid traveller. Otherwise, stipulate a museum stop to learn more about area environs.

Leave without seeing a museum? You can’t

While some travel guides refer to the Grosvenor Museum, built in 1886, as a hot spot, we take issue with that descriptor. The place is cool—and filled with variety. Discover Roman artefacts. The creative efforts of local artisans. Fascinating historical exhibits that trace Chester’s silver trade.

Do more than walk around and take in exhibits: Family activities designed for fidgety little ones are available, so mum and dad can relax without worrying that the sound of a precious artefact being dropped can be blamed on their child.

One of the biggest draws in city centre is a museum of a different sort: you must see the recently excavated Roman amphitheatre that’s the largest ex-training and entertainment complex of the Roman era in this part of England.

By recently, we mean that it was 1950 when archaeologists discovered this ancient arena. If your children were good during your visit to Grosvenor Museum, let them run free here while pretending to be Roman warriors of old.

Not your ordinary zoo

Have you become jaded or disappointed by zoos of late? Is your mantra “When you’ve seen one elephant, you’ve seen them all”? You owe it to yourself to stop at Chester’s pride and joy for reasons that extend beyond the animals: this was the dream of a little boy named George who promised his Dad that someday, he would open a zoo without bars.

This little boy wasn’t joking. The North of England Zoological Society was established in 1931 and despite wars and all manner of crises, George Mottershead’s zoo continues to thrive. His dream can be your delight when you visit the 125-acre zoo filled with 170 buildings that was still expanding when George passed away at the age of 84 in 1978.

Around 21,000 animals will be on hand to greet you daily; any time after 10 a.m. Ask your cab driver to get you to the elephants and he or she will know exactly where to drop you during your eclectic visit to Eastgate, Chester, a corner of England that’s as unique as the man whose dream of a zoo came true.

Are you as hungry as a bear?

We invite you to go directly from this list of adventures to “A Cabbies Guide to Restaurants in Chester,” or our “Cabbies Best Breakfast in Chester Guide”, because we would prefer it if you’re not the first person to pass out in our cab from starvation! Our recommendations are eclectic and delicious. To make sure they’re up to “cabbie standards,” we eat there to make sure hungry riders get back into our cabs feeling full and satiated.

We’ll even commiserate if your day at Chester Racecourse includes watching your favourite horse return to the paddock so slowly, he ambles past the finish line around the time you’ve asked to be picked up by our drivers. And in answer to a question often posed: No. Older horses haven’t been around since the course opened in 1539!

We are your ticket to Chester

Because everything profiled in this guide is a unique experience, Chester Taxi Service only hires drivers who meet exacting criteria. Every drivers is a know-it-all; a tour guide eager to share his or her love of this area with every passenger, so expect more than a drive when you hire our crew.

We are ready to take you where you want to go 24/7–and if you’ve got a big family, we’ve got a fleet of 8-seater minibuses to hire at your disposal, so you’ve no excuse to miss seeing this remarkable corner of U.K.