One of the most convenient transportation you can use is in the UK is the taxi cab but as tourist, or first time user you might be a little confused though when you first hop into one. Not because of the unfamiliar place, that one’s quite obvious, but because of how the cabbies talk. It’s like they have their own dialect. Learning is half the fun. 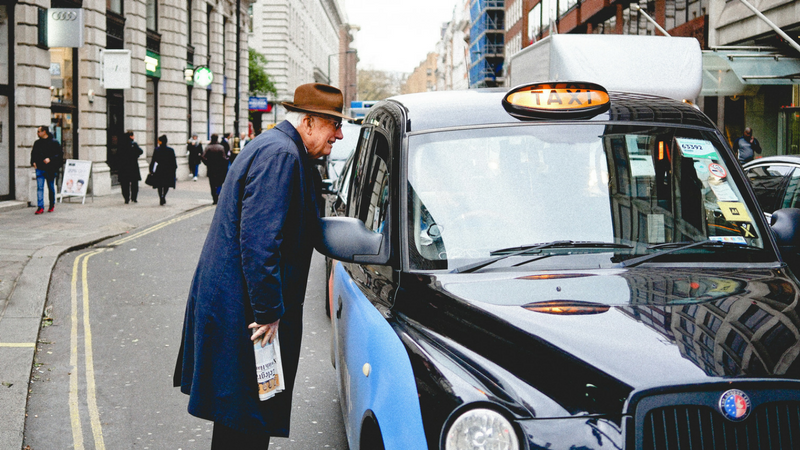 Aside from the usual cabs, there are some folks who refer to these as sherbet. It originated from a rhyming term from Cockney “sherbet dab.” It is a sweet dissolving sugar that you can eat with a lollipop.

The cabbies who rent a sherbet for them to drive are called Journeymen while cabbies who operate their own cab are called mushers. Fun fact, mush originated from the French term marche which means to “go.” It eventually became mush for English Canadians. There is also a sport called mushing that is predominantly in Northern Europe, North America, and the Alps. The musher is the one that leads the team of dogs.

It is a common sight for cabs to be in and around airports, all over the world. In the UK, cabbies who has a job at the airport are called flyers, not because they fly up to the air to fetch their passengers, but because it’s the airport transfer run. A lot of flying happens.

Musher’s Lotion is common in the UK. It means rain. When you visit the UK, make sure to bring an umbrella with you.

Cabbies refer to January as a kipper season because this is when folk have gone broke. Probably when cabbies could only eat kippers since that’s about all they could afford.

During events like concerts and theatres, or when kids are done with school for the day and the school lets them out, you see how they rush out of the building together like a swarm of bees? Cabbies call this “the burst” because they all burst out of the building together. So if you are planning on watching a play down at the West End theatre and it’s getting late, not to worry! There will be a bunch of cabs lined up outside the theatre waiting for you.

If you want to grab a meal, you can tell your cabbie that you want a Churchill. Not to worry though, this doesn’t mean that you want to eat Winston Churchill. This is just a slang that is used because Churchill gave cabbies the right to refuse folks a ride while they are eating.

If you are in London and you are planning on a trip outside that is over 12 miles, there are cabbies who will refuse to take you and tell you that “that one right there is a roader.” Long travel. However, there are some instances where you can snag a cabbie who would be willing to take you towards the suburbs or beyond.

Cabbies call the luxury hotels in the UK as American workhouse so don’t be too startled or confused when they refer to it using those terms.

When you travel in the United Kingdom, try to avoid being a Bilker. In simple terms, don’t try to get your way out of paying the cab fare. That would be unfair since you’re already being driven around the place.

You refer to new cabbies as butterboys; this is short for “but a boy” since they are just that in the world of cab driving. However, there are others who say that the term butterboy, or buttergirl, came from older cabbies who claim that the newcomers pinched their “bread and butter” work. If you visit during summer time, you might also encounter a butterfly. Not this beautiful flying creation that we see flying around near plants, but cabbies who only work during the summer.

You might also meet copperbottoms when you go back to your hotel late at night since they are cabbies who work a lot of hours. Copperbottoms are sometimes called leather arse due to the long hours they spend sitting inside the cab.

If you hear a cabbie referring to their passengers as a cock or a hen, don’t be too concerned. It’s a way of identifying passengers as a male or a female. Also, single pin refers to one passenger, not a pin you use for sewing.

The London Stock Exchange. If you are planning to go there due to a business transaction or you are meeting someone in that area just tell the cabbie to take you to Fagin’s Kitchen. Fagin is a character from a book called Oliver Twist by Charles Dickens. His character received stolen goods from folks. It’s funny, right? They aslo have another name for it. The Den of Thieves. The House of Parliament, on the other hand, is referred to as gasworks.

You can also ask your cabbie to take the Dirty Dozen because this will take you through the twelve roads of SoHo. You can do a bit of sightseeing before you reach your destination. Little apples grow quickly please is not meant to be taken literally when you hear a bloke telling this to their cabbie. This catchy phrase is another way of saying that you want to be taken to one of the theatres found in Shaftesbury Avenue; Lyric, Apollo, Gieguld, Queens, and Palace.

You might get confused if you hear locals say that they just got off the droshky when you know full well that they got off a cab. Droshky is the Jewish name for a cab, and it means pole of a wagon.

Legal off or legalled is when you pay the fare without leaving any tip. Don’t be like that. Give the bloke a tip for driving you around.

Your tourist experience will not be complete if you don’t visit The Dead Zoo also known as the Natural History Museum. It’s apparently called The Dead Zoo since all the stuff that is displayed in the museum once belonged to people who have longed passed the living.

Planning on going to the Royal Borough of Greenwich? The cabbie would probably take you through the pipe or the Blackwall Tunnel. It’s usually clogged though so best prepare yourself.

The Wedding Cake is also a must-see if you are in London. Also known as The Queen Victoria Memorial. It is made out of white marble dedicated to the late queen who reigned for sixty-four years. Good news for you, the memorial is right outside the Buckingham Palace which will probably be your next stop.

When you’re off exploring London on foot, and you need to take a black cab back to wherever it is you are staying, you can try going over to The Kremlin. It’s where cabbies take shelter over by the Albert Bridge.

Kojak with a Kodak also known as KWAK pronounced as “quack”. This is what cabbies call a policeman who carried around a speed gun. Kojak comes from an American crime drama in the seventies. The main character, Theo Kojak, was a lollipop-sucking New York detective. Sneaky KWAKS are called a blue tree.

If you have any questions relating to sherbets or their cabbies you can head on over to the PCO or the Public Carriage Office. They are responsible for giving licenses to cabbies or mushers and also to private hire vehicles or minicabs. The PCO was transferred to Transport for London (TfL) in 2000.

The iconic black cabs of London also called Hackney Carriages have a very interesting history. These cabs are older than you may think. Read about the history of the black cab and its story. These taxis have navigating the streets in London for three centuries unbelievably.

UK regulations define a hackney carriage as a taxi which is allowed to ply the roads looking for passengers / customers to pick up, as opposed to private hire minicabs, which may pick up passengers only who have previously booked a taxi online, by phone or those who visit the taxi operator’s office.

All black cabs, including our very own taxis in Chester are fitted with a fare meter which is programmed according to the agreed tariff by the council which cannot be tampered with. What the passenger sees on the meter is what the passenger pays.