If you are looking for a unique holiday getaway, Chester has it all. Chester traces its roots back to 79 AD. This walled city has been named one of the prettiest in England, and packed full of sightseeing gems and things to do. 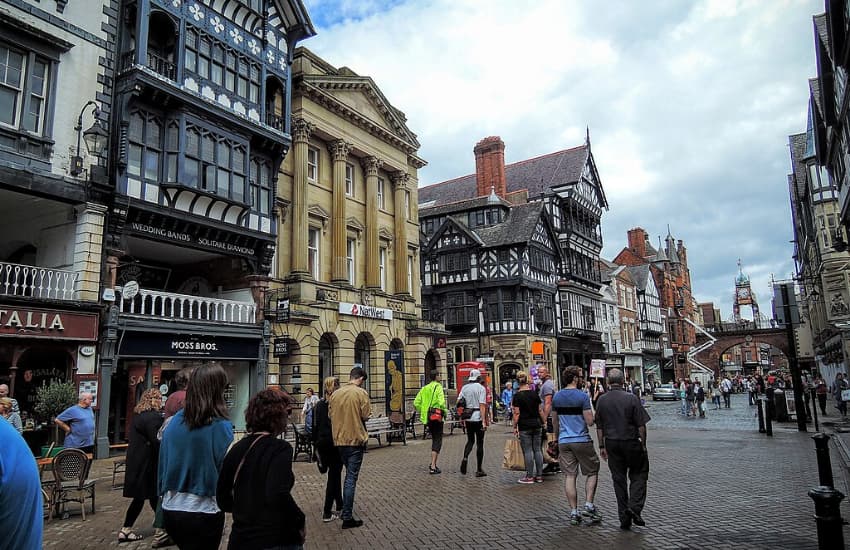 Whether you are on a day trip, long weekend or extended stay, Chester is full of interesting attractions.

Since Saxton times, people have worshipped on the grounds where the Chester Cathedral sits. Workers constructed the first church on this property in 1093, and you can still see some of their incredible work on the north side of the cathedral. The area built in the Norman style stands in stark contrast to the rest of the Gothic cathedral. Carefully examine the baptistery in the North Tower, and you will see an ancient carving of the game Nine Man Morris. As you stroll through the beautiful cathedral, you can still see evidence of the vandalism that occurred under King Henry VIII and Oliver Cromwell. Pay special attention to the choir stalls where you can see hounds, angels, dragons, maidens, and other mythological creatures carved into the wood by workers in about 1380. Before you venture to the Chester Cathedral, you will want to check their event schedule as art shows often occur here, and you can sometimes see people climbing the outside of this cathedral. After leaving the cathedral, stop at the Chester Cathedral Falconry and Nature Gardens to learn about birds of prey. You can even put on a gauntlet and fly birds while you learn more from the very knowledgeable staff.

George Mottershead and his family opened this zoo in 1931. It contains more than 500 animals, including babirusas with their massive curving tusks, okapi that cannot seem to make up their minds if they want to be a zebra or a giraffe, and chimpanzees who always seem to be putting on a trapeze show. In fact, there are 27,000 animals spread across the zoo’s 125 acres. You will also want to visit the beautiful gardens at the Chester Zoo that include the flesh-eating nepenthes collection, over 400 orchids, and Europe’s national collection of Copiapoa, Matucana, and Turbinicarpus cacti. Plan your visit to include at least one stop at The Oakfield, where you will find delicious British pub food and hand-picked spirits from around the world.

Put on your hiking shoes and explore the Walls of Chester that workers started building in about 70 AD. These walls are the only complete defensive walls in England, and you will be amazed as history unfolds before your eyes as you read the informative boards located along the circular path. As you walk in the footsteps of Roman legionaries, Anglo-Saxon warriors, Norman knights, medieval bowmen, and brave townspeople, you will watch the whole city unfold before you. While the walls were initially built to defend the city from attack, since 1760, they have been an important place to socialise. From the raised walkway, you will see many points of interest worth visiting individually. You can see the Kaleyard Gate that monks used in the 1200s, the Morgan’s Mount gun encampment, the Georgian Sedan House that contains the only surviving English wall sedan porch, and the 18th century Watergate House built of Flemish bond brown brick. You can also view the Bear and Billet Pub, which is located inside one of the most beautiful timber-frame townhouses in England. This walk also takes you around many infamous English towers.

Dating back to about the 13th century, the mostly black-and-white timber buildings called Chester Rows are filled with exciting shopping opportunities. You can easily reach the second story of these Medieval buildings by strolling along the continuous balcony. The first buildings of this type were likely constructed in the Middle Ages when artisans dug into the ground to give themselves more space to create their art. Since the bedrock is not far underneath the ground here, the lower-levels ended up at ground level, so these entrepreneurs built balconies where they sold their goods. Until about the 14th century, however, each shop had its steps to reach the balcony, so patrons had to climb up and down a lot during a shopping day. No one knows who is responsible for seeing that the continuous balcony was built. Over time, many of the original buildings were torn down, especially during the Civil War, so today, visitors see a mix of different building styles. You can see the oldest of these buildings by visiting The Three Arches.

The River Dee starts at Hilbre Island, Wales, and flows through Chester. You can find several tours that will take you out on a variety of boats, including party boats, on this river. In Chester, you can also watch the river flow by as you stroll along its shores. You will want to make sure to visit The Groves promenade where you will find lovely restaurants, can hear band concerts, and interact with locals and tourists.

Graham Webster and Charles Greenwood had The Roman Garden built for the 1951 Festival of Britain. Unlike a traditional English garden, this area contains many relics from the city’s history that have been moved to make it more convenient to preserve them and for you to see them. See an exhibit dedicated to the flourishing tobacco pipe industry that flourished at this site during the 17th century. You can also see where cannons attacked the city’s wall on September 22, 1645. A fascinating collection of Roman stones collected from buildings around the city is also visible. You can also see where prominent citizens held cockfights for over 250 years. The Groves that is located on the banks of the River Dee is easily accessible from this garden.

The Eastgate Clock stands at the site of the original entrance to the Deva Victrix Fort. The clock was added in 1897 to commemorate Diamond Jubilee of Queen Victoria. The clock designed by local architect John Douglas has four clock faces that are located under the copper ogee cupola. Openwork iron pylons support the clock. In 1768, workers constructed the three-arched sandstone structure, which connects the clock area to the city wall.

Everyone may find a different favourite activity at Grosvenor Park. Children are likely to enjoy a stop at the Grosvenor Miniature Railway for a ride on the 7¼” gauge railway. The miniature railway opened in 1996 to commemorate the centenary of the Duke of Westminster. Your children can choose to ride on steam-or-diesel-powered trains. Another unique activity that you can do at Grosvenor Park is to watch a play performed in an open-air theater between mid-June and late August. You will also want to stroll along the cobblestone lanes at this park to see the beautiful Victorian-like gardens. This park offers fantastic views of the River Dee or stop and get a bite to eat at the café in the Grosvenor Park Lodge, which was designed by John Douglas, who also designed the Eastgate Clock. This lodge is one of the earliest examples of the iconic black-and-white architecture seen throughout the city. Three historical arches at the park were moved from other locations around Chester to make great places to take photos.

The Chester Racecourse is the oldest one still in operation, and it has seen many important events occur there since its opening in 1539. Amazingly, the course was underwater from the River Dee during Roman times. This racing course was also where the first horse racing grandstand was constructed in 1812. You will want to watch the action on the 1 mile 1 furlough course that has extremely tight turns. Horse races take place here regularly from May to August.

Being an old city, Chester does have its limitations during busy seasons. Chester park & ride is a great option for day trippers, whilst parking in Chester should be planned ahead of time if you are visiting during peak season and events. Taxis in Chester are available around the city and can be booked from your hotel or location.

There are many reasons you need to make Chester, your next holiday getaway destination. Set a date and come explore this city today.